I have recently returned from a trip to Louisiana to visit my partner’s family. It was my first visit to that part of the country. The air is soft, misty, moist, so different from the dry clarity of Colorado air.

But what amazed me most was the trees. They are tall, tall, fully leafed out in April springtime. My partner’s son has ten acres, all mowed in a vast green lawn with trees set wide apart—huge pines and many live oaks of different sizes and ages. My partner tells me live oaks are so called because they are always green. The leaves stay on through the winter and each spring new ones gradually replace the old.

My favorite tree on our host’s property was a huge old live oak near the front of his house. There was a bench underneath, where I spent long quiet times resting in the peace of its presence.

The trunk at its base is so wide, I had to go to three sides of it to reach all around it with my outstretched arms. The bark is composed of rough ridges, subtly adorned in its crevices with yellow-green moss and gray-green lichen.

Only about four feet from the ground, the trunk divides into five branches, each as big around as most Colorado trees. These five branches lift and divide, lift and divide again. Some wrap around each other like snakes mating. Up and up the branches grow, spreading until they create a full circle of shelter. 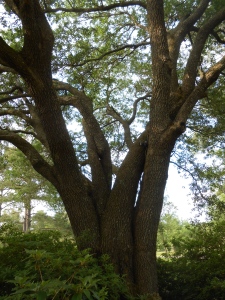 The tree seemed still to me except for the slight movement of its leaves in the soft spring air, but I knew it was dancing. Slow, slow the dance of its growth, as it shapes the magnificent architecture of its branches, too slow, for swift-moving human vision to perceive. But if one were to be very still, perhaps . . .

Does it love to dance as much as I do?

Coming and going from our host’s home, we were on the highways, in the shopping centers, surrounded by busy humans with their complicated agendas, attending as fast as they could to the intricacies of incarnate existence.

Resting under the tree, tuning in to its essence, was like entering into the space of meditation. I experienced a kind of time warp—its dance compared to mine. It’s benevolent presence, its wide-spreading canopy, created a larger field around all the concerns of my little life. Perhaps they were not so important after all, maybe not such a big deal. Then, after a time, even those small concerns melted away until there was only peace, and a deep sense of connection to the tree and the Life that creates and enfolds us both.

One thought on “THE LIVE OAK”